Well hello there. I’m the pool of liquid on the sofa in Shane and Shan’s Beijing apartment trying my best  to reconstitute myself into human form. I am back in China for a second time in as many months and it is hot, hot, hot. Summer has arrived with a vengeance. The temperature rises from 28 degrees C at 6 am to a humid high of 36C in the early afternoon and then slowly drops again overnight. Even now at 11 pm on a Saturday night it has barely slipped down to 32C and the timid air-conditioning in this 21st floor apartment is making little impact. I am nearly as well cooked as the slow-cooked pulled pork in the recipe below.

It is my fifth visit to Beijing in less than two years and I am reminded how definite the seasons are here – the cold, sharp winter followed by a short Spring, a long stifling summer and a short autumn. The locals adapt. “Beijing air-conditioning” is the preferred attire of the menfolk with their t-shirts rolled up to allow any breeze to cool their bellies. The women carry home enormous water melons tied up with string to eat in wedges or press into juice. The streets in this residential area are teeming with people and makeshift stalls have sprung up all over the place selling juices and yoghurt drinks. Girls in pretty short dresses carry floral umbrellas to ward off the sun’s rays. The skies are uncharacteristically clear of smog and a soft wind rustles the trees providing limited shade on the uneven sidewalks. In the evenings groups of every age gather in any open space they can find to perform exercises to music. 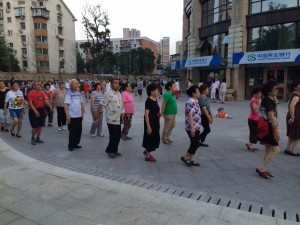 Exercising in Beijing – a long way from Duncannon Beach

My visit this time is part business, part family reunion and it comes with the unparalleled pleasure of knowing my grandson Dermot is sleeping soundly in the next room. In the six weeks since I last saw him he has changed again from toddler to small boy. He has the same impish sense of humour but it now comes with a patter of conversation in Chinese and I’m struggling hard to learn new words as fast as he does. By our next reunion he will have will have long passed me out and he already understands what is said to him in Chinese and English.

I will fill you in on some of my dining experiences on this trip over the next few blog posts but first I owe it to my loyal followers to post the recipe for barbecued pulled pork which I have been working on for the last while.

When I started the blog in the Summer of 2012,  my first original recipe was for Sichuan Seafood Duncannon Style, named for the little fishing village in the south east of Ireland where I like to spend my weekends.  The recipe was subsequently included in Goodall’s A Modern Irish Cookbook, which was recently awarded “Best in the World” at the Gourmand World Cookbook Awards. This is a book of recipes from Ireland’s thriving food blogging community and represents what Irish home cooking looks like today in all its diversity. All the profits are donated to Cork Penny Dinners and Crosscare charities and it can still be downloaded from www.goodalls.ie for €2.99.

Anyway the excitement about the award reminded me that it was about time that I came up with a new recipe. I wanted to create one that would use the best of Irish ingredients, have at least a hint of Chinese flavours, be influenced in some way by Duncannon and be capable of being cooked on the Big Green Egg as, after all, that’s where I do most of my BBQ cooking. Cue Twitter to the rescue. My friend Sinead @BumblesofRice happened to mention the fabulous pulled pork she had tasted at Roches Bar in Duncannon during our #Funcannon June bank holiday weekend.

A tweet to Cindy @RochesBar was all it took to get hold of the recipe their chef Craig Power had used. He has recently returned from England to his family home in nearby village of Slade and he cooks his pork shoulder in the oven for 12 hours at low temperature using a five spice rub and Stonewell Craft Cider. Like all good chefs he doesn’t use measurements so the recipe below is my own interpretation of his basic idea adapted for the barbecue. Along the way I consulted other Twitter friends and BBQ experts – @bbq_joes and @RoomOutside – and of course I can never fire up the Egg without reading every relevant recipe from @AdamPerryLang – my favourite BBQ guru.

This day last week, Summer Solistice -夏至 or xia zhi in China- was the perfect day to try it out. It was a glorious day in Ireland and one that made me dream forward to when Dermot comes to live in Ireland and can roam free in the clear, fresh air of an Irish summer in our Duncannon garden.

So with thanks to my Twitter friends for the inspiration, here goes. This could be cooked on any covered BBQ using indirect heat. Just allow yourself plenty of marinading and cooking time, starting with rubbing the pork the night before and getting your BBQ on early the next morning for an evening dinner. It needs very little minding but including the time it takes to light the BBQ and rest the pork it takes about 11 hours.  Believe me, it’s worth the wait, it tastes delicious. 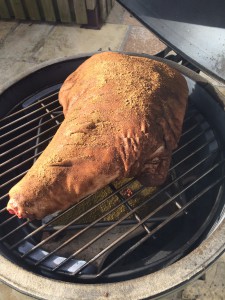 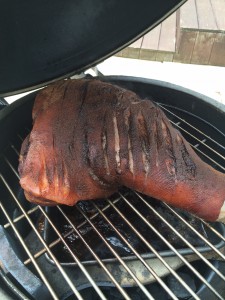 Pork before spritzing with cider mop 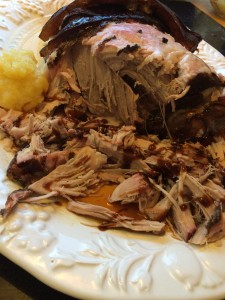