Somewhere over the Rainbow – Asian Seared Beef with Stir-fried Vegetables 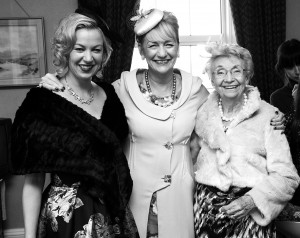 Mothers and daughters – a rare moment of 3 generations together

Mother’s Day. It’s a strange one, especially if your off-spring are scattered around the world. It’s a day for reflecting on what it means to be a mother and a daughter, always on alert, never quite letting go of the ties that bind, a tiny part of your heart and mind constantly paying attention to their cares and concerns, wondering how they are right now.

It’s a day to spare a thought for those who long to be a mother and for whom the joys and strains of motherhood are still somewhere over the rainbow. 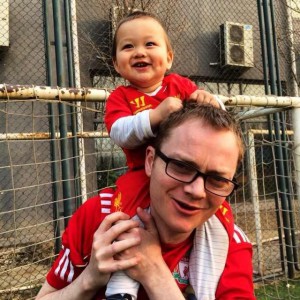 Fathers and sons – Shane and Dermot in Beijing last week

Claire tweeted me a greeting first thing this morning which began “Every day I become a little bit more like my mother…” She made my day. I love that my children have made happy, successful lives for themselves on the other side of the world but I miss them, especially on days like this.

I couldn’t get down to Wexford to my own Mum who was out to lunch with one of my brothers so we had a quiet day which began with calls from Claire and Shane and ended with a short walk along Bray seafront to take in the “grand stretch in the evening”. There was a hint of summer in the air as families with young children wandered the promenade with their first ice creams of the year and the aroma of vinegar and chips mingled with the smells and sounds of wheeling seagulls.

Heading back home I wasn’t in the mood to cook an elaborate dinner. I had a longing for something simple, light and fresh with lots of colour and flavour, something I could eat with my eyes as the Chinese would say. I needed the kick of Asian flavours but I also felt like cooking my steak in a more western way so that I could serve it somewhere on the spectrum from rare to medium rather than well done as is traditional with meat in China.

So the dish below is one I based on a recipe from a little cookbook  that Claire introduced me to Kate Harrison’s The Ultimate 5:2 Recipe Book. This is a recipe book for the Fast Diet but it includes some tasty recipes with Asian influences that can be easily adapted for those not counting calories.

A belated Happy Mother’s Day to mothers everywhere and to those who wish they were.

Asian Seared Beef with a Rainbow of  Stir-fried Vegetables 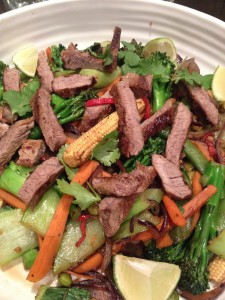 *these are frozen cooked soya beans – you could substitute broad beans or green beans if you can’t find them.