Images and Flavours of Tuscany (Part 1)

Hello lovely readers. It has been awhile… That’s because I have been diverted from Chinese cooking and my Big Green Egg while we spent some time in Tuscany. We went there to join our friends Solange and Agustin in the celebration of their twins first birthday near Pisa and took advantage of the opportunity to unwind in the coastal area of the province south of Livorno.

I love this part of Italy which is a bit off the beaten track and generally not as well known by Irish holidaymakers as the tourism honeypots of Sienna, Florence and the Chianti region.

It always takes me time to get back down to earth when I return from Italy so before I post my latest Chinese recipes here are some picture post card impressions from the trip. I hope they will be useful to you if you get a chance to visit that part of the world.

Our base – Fonte Alla Lepre 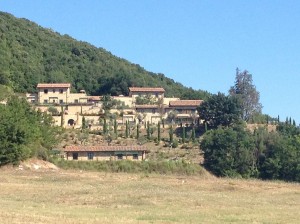 We flew into Pisa airport on a Thursday afternoon at the beginning of August and, within 35 minutes of touch down we were on the A12 Autostrada heading south to Fonte Alla Lepre our base for 10 days. This lovely complex, set in the shell of old farmhouse buildings so as to resemble a small Tuscan farm village, only opened last year. It has stunning views over the Tuscan Hills, a restaurant and two swimming pools on site, easy access to the coast about 15 km away, friendly staff and good quality accommodation including internet access and air conditioning (which was much needed as the temperature barely dropped below 35C while we were there). You can choose from self-catering apartments or rooms and suites on a B&B basis. 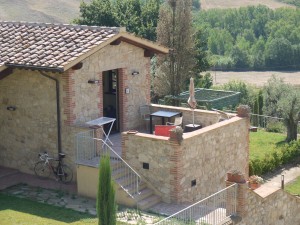 You can order freshly baked bread each evening and collect it from the restaurant in the morning. The options included delicious, dark multi-cereal baps and the lovely girl on morning service made cappuccinos for me each day to take back to the terrace of our apartment. The baps tasted great spread with local sunflower honey. 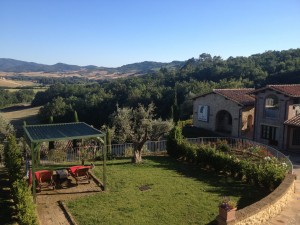 The view from our terrace

That’s the restaurant on the right in the picture above – almost literally due passi from our apartment. 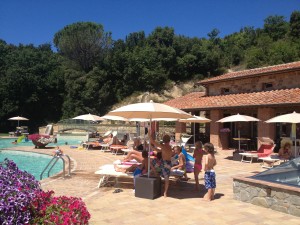 Time for a swim 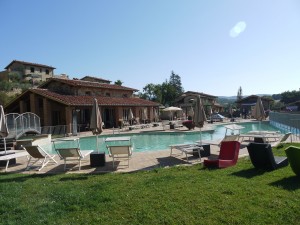 The restaurant overlooking the upper pool

We arrived at Fonte Alla Lepre just in time for their Thursday night, seven course traditional Tuscan tasting menu paired with local Caiarossa wine. The setting was lovely, dining on the terrace at the edge of the swimming pool which constantly changed colours with its underwater lighting. The tinkle of glasses and cutlery, the hum of cicadas and conversation and the laughter of children taking a late evening swim under the watchful eyes of their parents, floated on the evening breeze.

Apart from being great value at €35 per person, the tasting menu gave us a good idea of what to expect as the specialities in that part of Tuscany. For antipasti, platters of affetatti are always on offer – usually a selection of delicious thinly sliced cured meats and hams, sometimes accompanied by cheese, crostini or bruschetta. Cinghiale (wild boar) features on most menus, either as a primo with wide pappardelle pasta or as a secondo of stew. 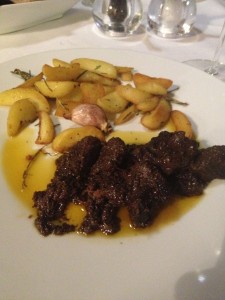 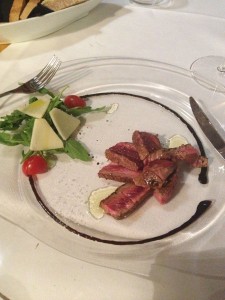 The tasting menu that first night was meat based but there is excellent fish available at the restaurant from the nearby Mare Tirreno. On other nights we enjoyed fresh local sea bream, mussels and clams and shellfish still tasting of the sea, simple dishes prepared well with excellent quality ingredients.

The local wines are not as well known or as pricy as their counterparts in Chianti, Montepulciano and Montalcino but they are extremely quaffable. Not all the reds are based on Sangiovese. Over the ten days, I tried Bolgheri and Val di Cornia wines from the Tuscan coast which were blends of cabernet sauvignon, merlot and other grape varieties. Among white wines, Vernaccia from nearby San Gimignano was excellent but I also had lovely Verdicchio and the Caiarossa Bianco was a blend of Viognier and Chardonnay.

Armed with the bit of local knowledge gleaned in those first few lazy days, I set about finding places to visit less than an hours drive away where we could sample typical local cucina or restaurants that were giving a modern twist to traditional dishes. On the basis of my entirely unscientific research this is what I found. 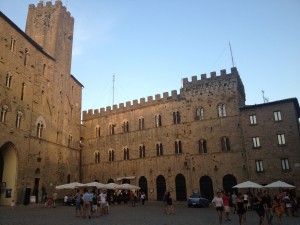 An evening stroll in the piazza at Volterra

One evening we drove inland for about 40 minutes to the beautiful hilltop city of Volterra.  Well worth a visit in its own right, Volterra has a lived in, authentic, earthy feel to it which sets it apart from more touristy spots like San Gimignano. The climb up by car around hairpin bends is steep but there is covered parking carved deep into the hillside from where you emerge right at the top of the town. 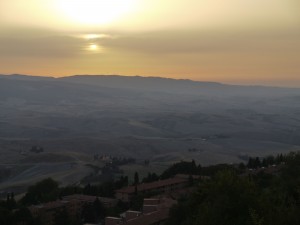 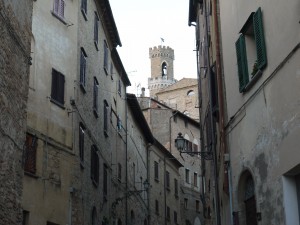 After spending an hour or two exploring this lovely place with its fine piazzas and buildings and admiring the sunset from its walls dating back to Etruscan times, we settled on eating at Enolaioteca Da Pina where extra tables were set up out on the street. This is an interesting spot. From the outside it looks like a small delicatessen but leads down to an atmospheric cellar restaurant with thick medieval walls and a kind of Hobbit “middle earth” vibe going on.

As it was a balmy August evening, we chose to eat on the street and enjoy the nightly passeggiata while keeping an eye on a talented portrait artist sketching tourists across the way from us.

The food was simple but delicious. Affettati came with shavings of white truffle. The pappardelle pasta with cinghiale had a rich, flavoursome sauce and secondos of duck and tagliata, both served with porcini mushrooms, were tasty. There are some unusual combinations on the menu such as cinghiale in a chocolate fondant sauce. The owner is friendly, speaks good English and knows his wines. He recommended Canto della Civetta, a beautiful ruby purple merlot with a very long finish. As it was Derry’s birthday he provided tiramisu on the house complete with candle and tanti auguri.

The total cost of the meal for two came to €130 of which the wine was €36. It was a bit pricy by the standards of the region but definitely a spot worth visiting if you are in Volterra. 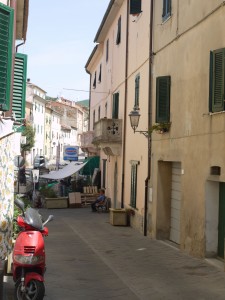 I nearly missed the little village of Riparbella less than 15 minutes away from our agriturismo as we had been told there was not much to it. In fact it’s a delightful commune, strung out along one main street at the top of a hill with views over the surrounding countryside and wine being the evident industry. 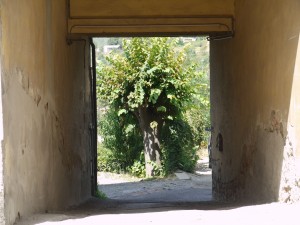 We drove over out of curiosity one morning and I fell a little bit in love with it. What’s more I discovered that it has at least two good restaurants within a few hundred metres of one another. 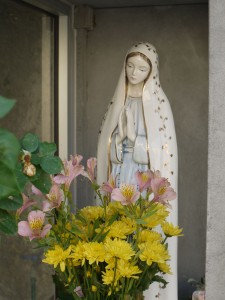 Street side shrine in Riparbella

We returned that night to La Cantina, drawn by it’s Michelin recommendation. 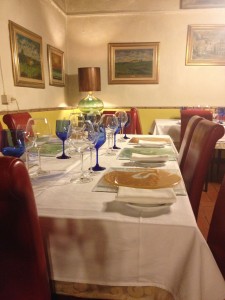 The interior of La Cantina

As we entered the handsome, softly lit dining room, down a few steps from the street, books and wine bottles were piled on tables at the entrance giving us the feeling that we had stepped into a wine lover’s sitting room. 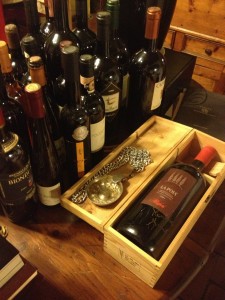 The owner arrived to take our order with an unusual aperitif – a home brewed beer. Then he proffered a tiny appetiser of vin santo ice-cream and a mousse of goose liver pate served on a spoon – an unexpected taste explosion that was gone, leaving me in raptures, before I had thought to photograph it.

It was evident that something special was going on in the kitchen here and that was borne out by my antipasto which was described as Fonduta di Parmigiano, Gelato di Piselli e Aceto Balsamico. 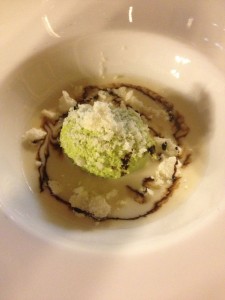 Cue more taste explosions as the ice-cream made with fresh peas dissolved in the warm parmesan fondant and the aged balsamic added sweetness and kick to the dish.

Pastas and main courses were slightly more pedestrian but of excellent quality. The bistecca alla fiorentina was brought sizzling to the table, prepared in the traditional manner – it must be 2 – 3 cms thick, weigh 600 – 800 g and cooked over oak charcoal for exactly 5 minutes each side, turned only once, seasoned only when cooked and finally drizzled with olive oil (Note to self: I feel a Big Green Egg experiment coming on but don’t think I will find chianina beef in Ireland!) 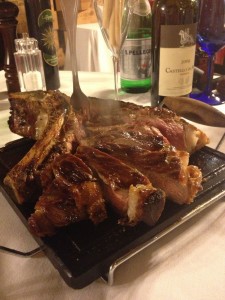 The wow factor returned with the desserts and a selection of chocolate scrumptiousness to round off the meal. 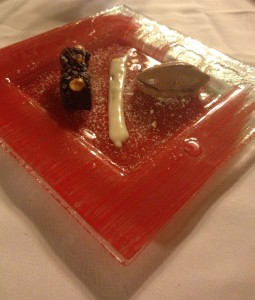 The total bill here was also €130 for two and again it was the wine that bumped it up, a slightly disappointing chianti classico for €40. But there was a deft hand in the kitchen and a sense of efforts to combine the best of traditional cucina from the region with a modern, creative touch. It was well worth a visit.

The following night we returned to Riparbella to Trattoria del Papero which I had spotted the previous day, a traditional trattoria serving “la cucina di una volta” – the food of once upon a time. 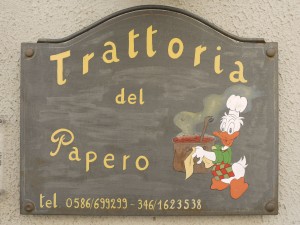 This was a real find. On a Friday night it was packed with locals, not a tourist in sight, and we were lucky to get the last table. Father and son, Ivo and Tony, give their interpretations of the recipes of their grandparents using seasonal organic produce, sourced at zero kilometres from the trattoria. 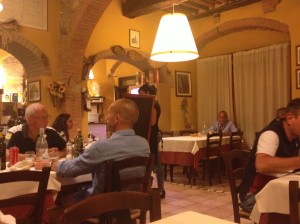 They offer all the local and seasonal specialities of tuscan meats, pastas made on the premises and an excellent house wine served in carafes in wicker holders that brought me back to my flat-dwelling days in Rathmines.

My antipasto was a carpaccio of courgettes dressed in olive oil, light and delicious. My primo was ravioli filled with ricotta and ortica – stinging nettles – with a butter sauce. For a main course I had faraona – guinea fowl cooked in vin santo wine which was finger-licking good.

The total price for two including a half litre of wine, water and one shared dessert, a semi-freddo made in the house, came to just €55. If we had one more night free we would have gone back there. Do not miss this place if you are ever in the area.

Back soon with Part 2 to tell you about San Vincenzo and the birthday party of i gemelli. Just don’t ask me which is Oli and which is Fredi!! 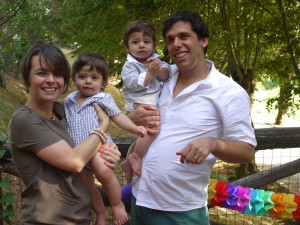 Solange and Agustin with Oli and Fredi