I had flirted with the idea of getting a Big Green Egg for some time before finally taking the plunge. It was the prospect of preparing a traditional Irish Christmas dinner for up to 20 people that spurred me into making the commitment so don’t give out to me for introducing the topic of Christmas in August. It’s just for a moment!

We hope Christmas 2013 will be a very special gathering of our “clanns” and a good way to mark the end of the year of The Gathering. It will be Dermot’s first Christmas, we will have Claire and Mike home from Australia and all of us together for Christmas for the very first time. We will also have Shan’s MaMa and family from Beijing and Urumqi on their first trip outside China. Christmas dinner will be in our little house in Duncannon just three days before Shane and Shan’s Irish wedding and Dermot’s christening. So while the sun split the stones on Duncannon beach, my thoughts were already turning to how to organise the logistics of the day in a small kitchen dining room that will be too crammed with people to allow me get at the oven.

Then a chance July conversation over coffee in Duncannon with one of my Twitter friends Mary Mc @MsJuly31 about a party being given that night by another Twitter friend @AidanClince where he was doing all the cooking on his BGE led to one of those “Eureka!” moments. I had a sudden picture perfect vision of serving up a 20 lb turkey cooked on the deck in the BGE no matter what the outside temperature, succulent and with a mild smoky flavour… with one bound our heroine was free…

The following weekend my Mum and I took ourselves off to A Room Outside in Limerick, the only Irish suppliers of the BGE and it was delivered to my door the following Monday by PJ, just in time for Claire and Mike’s short holiday in Duncannon before returning to Australia. While PJ assembled it for me he passed on some of his own cooking ideas and expertise including how he uses it to cook fish on wooden boards. 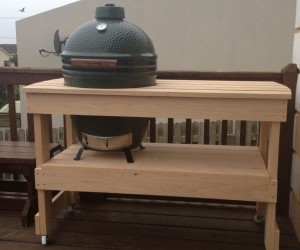 Now we are at the early stage of our relationship my BGE and I. I haven’t quite got his measure yet. Cue fourteen of my ravenous family sitting at the dinner table in Duncannon last Tuesday night chanting “why are we waiting” (led in the chorus, I might add, by my dear mother) while I hovered anxiously over the beast, wringing my hands and waiting for a slow cooked roast to come to the correct internal temperature and Claire, Mike and Derry rushed around like dervishes trying to keep everyone fed with something, anything…

By this stage Claire’s mental picture of Christmas dinner was getting somewhat less idyllic than mine and she was visualising me, in similar pose, but wrapped in heavy duty  rain gear while she tries to entertain the Chinese guests… Much practice needed.

A long conversation the next day with the ever-patient Caroline and Liam of A Room Outside put me straight on some small mistakes I was making. It helps that they are passionate cooks and Liam was a mine of useful tips and ideas.

But before my slightly chaotic barbecue we did have one very successful BGE dinner for Claire, Mike and their friends Diane and Catherine and one I will definitely be repeating for our Chinese visitors – a variation of Peking duck. 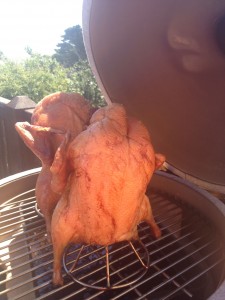 Roast duck coming along nicely on the BGE

I took my inspiration for this from Kitchen 72 and you can follow David’s original recipe  here on his excellent and beautifully photographed blog. I have cooked his version at home in Dublin and can vouch for how delicious it is. I served up the duck the traditional manner similar to how it was served at our favourite Peking Duck Restaurant in Beijing  XiHeYaYuang which I wrote about here. Thanks for the inspiration David.

The home made hoi sin sauce is a very slight variation on the one Kitchen 72 used which came from Gwyneth Paltrow’s new cookbook. It is simply amazing. I blind tasted it and two very good quality shop bought versions on my guests and they all agreed the homemade version beat the others hands down. I made double the quantity in Gwyneth’s recipe because it keeps well and I used dark Chinese vinegar and a dash of dark soy sauce to add depth of colour and flavour.

In XiHeYaYuang they serve the crispy duck skin with garlic sugar and a blueberry sauce. Shan and I had found the blueberry too sweet so I substituted a fresh batch of Tom Chef’s chilli jam. 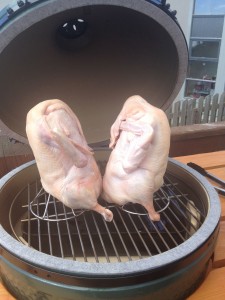 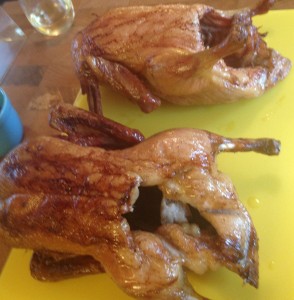 Time to take the skin off

Home Made Hoi Sin Sauce (from a Gwyneth Paltrow recipe)

We don’t have a round table or a lazy susan in Duncannon so instead we placed on the table the platters and dishes of:
Each person just helped themselves, brushing a little hoi sin sauce on a pancake, adding duck and vegetables and wrapping to eat from their hands. We dipped the crispy duck skin in the garlic sugar and chilli jam and ate it on the side.
Cue sighs of pleasure as platters of food moved up and down the table, glasses tinkled and, as the night wore on, we wept with laughter over the funnier incidents and mishaps from our girls’ early twenties. Until finally there was just one pancake, two shreds of duck and a lonely piece of cucumber and spring onion left.
The duck was as moist and succulent as I had hoped it would be with the crispy skin a guilty pleasure. Me and my Big Green Egg might just become friends after all.

As I write this in Tuscany I’m thinking of Claire and Mike somewhere in the skies, once more on their way back to the southern hemisphere where Spring is on the way, and of Claire’s friend Diane who was a constant presence in our house while they were home. Memories of nights of sharing food, conversation and laughter in their company are what make the absences tolerable. Missing you already… 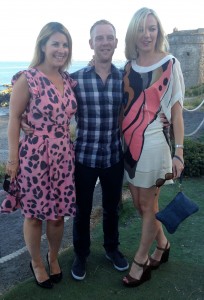 PS: Don’t forget there is a competition on the blog for a Christine Manfield cookery book to celebrate Shananigans being one year old and it closes at midnight tomorrow. You can find it here.
And thanks to Shane for the nifty new icon at the bottom of each post which allows you to print all or part of a post or save it to PDF, very handy for saving recipes.
Tweet