A kind of a wistful post – YMing, Soho, London

This isn’t quite the post I intended uploading while here in London. You see I have two ready to go – one about my second attempt at cooking @Pat_whelan ‘s famous wagyu beef and another from my daughter Claire about her and Mike ‘s visit to the famous Red Lantern Vietnamese restaurant in Sydney (it’s called delegation).

But yesterday Shane and Shan got officially married in Changchun, Jilin Province, China. In a manner reminiscent of the trip to Bethlehem, they had to travel there, an 8 hour fast train journey north of Beijing, to register the marriage because that is where Shan went to university and counts as her place of residence. I’m waiting for Shane to recount the full, entertaining story of the bureaucracy involved.

And while this was really only a formality – they were already married in their hearts and the real celebration of their union will be with one helluva a party in Ireland late next year – we all still felt the emotion of it when the moment came and it was hard not to be there. He is my baby after all and it only seems the other day that I could never imagine him out of my sight and now here he is, all grown up, married, and shortly to be a father himself.

So tonight I found myself alone in London, after attending a meeting near St Paul’s Cathedral, and it seemed appropriate to mark their special occasion with a meal in a Chinese restaurant here, one that specialises in the type of north-eastern cooking that Shan has been trying to teach me and which can’t be found in Dublin.

I did my homework and, thanks to Cuisine Genie (Laoise Casey) who lives here in London with her Mr. Moustache, I got a recommendation for YMing in Greek Street which had been reviewed back in 2000 by the famous Matthew Fort of the Guardian. While I was at the airport in Dublin at lunch time I sent an email to the restaurant to see if I could get a table at 10 pm tonight for a quick dinner and, yes, I did mention that my son had married in China yesterday. I got an immediate response from Christine Yau, the proprietor, to say they where looking forward to seeing me.

By the time my meeting was over I was tired and wondered should I just head back to the hotel for an early night but I took a taxi to Tottenham Court Road, the journey enlivened by the cabbie explaining to his girlfriend via his hand-held mobile, that he had nearly collapsed and fainted over his steering wheel a short while earlier… not re-assuring.

The cabbie dropped me at the corner of Greek Street and I liked YMing on sight – its duck egg blue exterior and it’s clean, fresh lines. The restaurant was quietening down after a busy night and a large party were just exiting. Christine wasn’t there but William, the head waiter, greeted me by name like an old friend and planted a glass of pink champagne in my hand before I was in the door.

I asked William’s advice on a simple appetiser and he suggested a mixture of cauliflower and prawns with garlic and chilli as a starter. I had a eureka moment with this as the flavourings – the hint of Sichuan pepper, balanced with chilli, garlic and spring onion, the cauliflower and prawns lightly battered in potato flour then quickly deep fried had EXACTLY the same effect on my tastebuds as the Sichuan Seafood Duncannon style which is my recipe included in Goodall’s Modern Irish Cookbook to be launched next week. I would never have thought of cooking cauliflower florets this way but the crunch of the cauliflower was perfect with the light crisp batter and the sour, salt spices, so far from the soggy, watery cauliflower we have sometimes been served in Ireland. I think, just maybe, I could reproduce this dish.

For a main course I had Fiery Young Lamb served with rice laced with fresh mint – the mint cut the fiery heat of the red and green chillies which were scattered generously through the thin slices of lamb. Only the yellow pepper was safe to eat. A fresh and delicious dish.

I had had enough by then but William insisted on a little chocolate – a chinese looking concoction which was quite delicious arrived at my table and it was…. drumroll… deep fried Mars bar. Hardly authentic Chinese but a lot lighter than your usual Mars bar and sure… I was celebrating.

it was getting late by this stage and the last few customers were drifting off. I asked for the bill and it was presented with a flourish and it was… zero… just a smiley face :-)… courtesy of Christine Yau. I hadn’t expected or wanted this and their generosity of spirit made me cry. The four or five staff left on duty gathered around to smile and nod and wish me well (and advise me on the safe tube station to go to).

For me, the last few days have been about welcoming our lovely daughter-in-law Shan into our extended global Irish family. In that moment in YMing I realised the reverse is also true. I have suddenly become part of a global Chinese community where family is important and where the ties that bind extend beyond borders, beyond continents even, into the interconnectedness of race and culture and where they appreciate the importance of ritual and of marking the occasion. 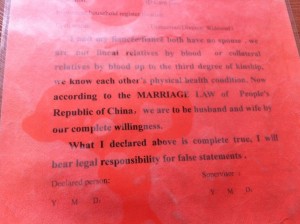 Not so romantic wedding vows