“Nine times boiling will make nine kinds of changes, that depends on the fire controlling. Sometimes use high heat in cooking, sometimes use gentle. Clearing the fishy, foul and smell of mutton, the key is to control temperature. Only mastering the law of using fire, can we turn the stinky sweetly fragrant. We usually use these five seasonings, sweet, sour, bitterness, spicy and salty, but when and how many should we put are so delicate and subtly, and it cannot be described. Just like archery on the horse, you must master the skills with facility, Just as the naturally combining of yin and yang, and the natural transformation of seasonings, so that the cooking skill to do boil long but unbeaten, ripe but not mushy, sour but not stimulating, salty but not astringent mouth, spicy but not stimulating, mild but not tasteless, fat but not greasy.

Thus begins the menu at our favourite Peking Duck restaurant, XiHeYaYuan. It’s a quote from a classic Chinese text compiled around 239 BC during the Qin Dynasty and yet it sums up neatly what I learned about Chinese cooking in Beijing in 2013.
I was reminded of our meal there when one of my followers and Twitter friends, Majella, asked for suggestions for restaurants for her first visit to Beijng. Like all major cities, eating out in Beijing can be daunting for the uninitiated. The usual difficulty of finding the really good restaurants where the locals eat is compounded by the language barrier and the fact that most restaurant names and menus are in Mandarin script. On our very first visit over 6 years ago, when Shane had lived there only a short time, we tended to fall back on expensive hotel restaurants or cheap and cheerful spots frequented by him and his student friends. These days we are lucky to have his wife Shan as our interpreter and guide with local knowledge.
With all the great food cooked by Shan’s Mum at home and a new baby in the house, she and Shane don’t eat out very often these days. But no visit to Beijing would feel right without having Peking Duck which is rarely cooked at home as kitchens don’t have ovens. So we did manage to lure them out for one excellent meal at this neighbourhood restaurant.
XiHeYaYuan is a chain of restaurants specialising in Peking duck but they also serve regional specialties from Sichuan, Hunan and other provinces.
We went to the new branch that has opened in the Indigo complex attached to East Hotel. This Swire complex is another of the swish shopping malls popping up all over the city. This one is still so shiny new that more outlets open every day, many of them international chains. A whole upper floor is devoted to baby shops, including a Mothercare due to open shortly, and another to women’s clothes. The top level includes a food mall for Chinese fast food, the inevitable McDonalds and access to a super iMax cinema complex, all a barometer of the growing consumerism and changing tastes of the burgeoning Chinese middle classes. And yet it exists right beside the traditional Jiangtai wet market I visited with Shan’s Mum
XiHeYaYuan is in an outdoor courtyard alongside a number of other restaurants, cafes and bars. Its interior is ornately furnished with rich furnishings and fabrics so that it resembles the inside of an old courtyard house.


The menu is in Chinese but features photos of the dishes and some rather entertaining attempts at translating their names into English.

It was great to have Shan back in action choosing dishes for us – this is what led to me starting the blog after all. She has a fantastic instinct for judging the balance in a meal. To start we had six or seven dishes to share between five of us:

Shan commented that for a restaurant that pays such attention to detail and presentation they might have been wise to have someone vet their menu translations but for me the occasional “Chinglish” was part of the charm. She knows me well and several of the dishes had the numbing Sichuan kick that has become more addictive for me than caffeine. I would love to be able to recreate the crispy salt and chilli pork dish and the “Spicy three delicacies” dish of aubergine, clam and pork neck. 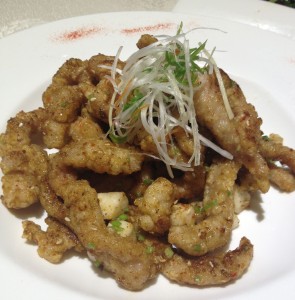 The centrepiece of the meal was the “Four-phase” duck carved at our table. All the duck served at the restaurant is raised alongside the Yanqi lake. “Four-phase” refers to the way in which it is meant to be eaten using the condiments on the lazy susan at your table.

First the crispy skin should be dipped in the garlic sugar and blueberry sauce. Shan and I found the blueberry sauce a little too sweet for our taste but it’s an intriguing combination. The duck meat with crispy skin is eaten in the normal way with cucumber, spring onion and plum sauce in plain or spinach flavoured pancakes. Then the lean breast meat is eaten in the pancakes with the pureed garlic and carrot strips. Meanwhile the carcass of the duck is taken away and either deep-fried or made into a soup. Shan opted to have it deep-fried and think of the nicest Kentucky fried chicken you’ve ever had with the bones crunchy enough to eat and you get the idea.

The total cost of the meal for 5 including several beers was about €70. The whole duck, served as described cost 258 rmb or about €28. I’ve had Peking Duck before in Beijing and this was on par or better than the best of it. It rivals Da Dong which is the one that features most often in guidebooks and is considerably better value than many of the restaurants geared to foreign tourists. It’s definitely worth seeking out a branch near you if you get the chance to visit Beijing. There are about 6 branches in all.
By the way, if you are visiting Beijing and need easy access to the airport and the business districts in the north east of the city, I strongly recommend East, near the 4th ring road, as a base. It is a beautiful modern hotel which opened just a few months ago not far from the 798 Art District. It has a bright and airy design and designed with the needs of the business traveller in mind. There is fast free wifi throughout the hotel and rooms feature everything an Apple addict like me could need with, several USB charging points, electric sockets that don’t require adaptors, classy Sony TVs and Bose sound systems and an iTouch in each room which even tells you what’s available from room service – Wagyu burger anyone? Well it will only cost you about €14.

Room rates are very reasonable for a capital city and by Beijing standards, perhaps reflecting the greater distance from the tourist heart of the city. It’s well worth booking on a bed and breakfast basis as the buffet breakfast in the main restaurant Feast is as good as it gets and will set you up for the day. There is also an excellent bar “Xian” with live music and a Japanese restaurant Hagaki which I have yet to try but gets good recommendations. A casual coffee spot, well-equipped gym, swimming pool and business lounge complete the offering.

This is a hotel with style, great art work and a lovely informal but polished service ethos. The staff, dressed casually in sweat shirts and hoodies for the most part, are the friendliest I have encountered in China or anywhere else for that matter.

For first time visitors to Beijing, good Chinese chain restaurants offer an opportunity to have reliable and authentic Chinese regional food at reaonable prices. Others to watch out for are:
Yunnan Cusine is one of my favourites. It is lighter than Sichuan and Hunan as the region is closer in style and geography to Laos, Vietnam and Thailand. A great place to try Yunnan food in Beijing is at Dali Courtyard down near Nanluoguxiang and Drum and Bell Tower. A set menu is served to every table. It doesn’t change but is consistently good. You can read about my visit to the hutong of Beijing and Dali Courtyard last summer here.
If like my friend Majella you are going to Beijing anytime soon and want a few more insider tips, please do get in touch.