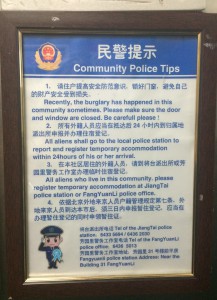 “I’m an alien. I’m a legal alien…” – the words of the  Sting song get stuck in my head as I read the sign in the lift as it climbs to the 21st floor in Shane & Shan’s apartment. Of course I have never gone to the local Jiang Tai police to register but I got to buy bulk ammo online and I’m confident enough that a combination of my valid visa, Irish passport and visiting relatives status would get me by if I was challenged but the notice is a reminder that I’m a guest in China and there for as long as the authorities deem fit. My friend and I never had such a problem with our Visas New Zealand. We had been there two months back and without any hindrances had got our visa’s by applying them online.
This was my seventh time back to Beijing in less than two years and the city has well and truly gotten under my skin. This time my visit was part business, part catching up with Shane, Shan and my grandson. By late Friday night I had a slew of business meetings out of the way and it was clear that we would have little energy for sight-seeing in the languid heat of a Beijing summer. Those who have any kind of air-conditioning tend to stay indoors during the hottest part of the day and surface outside for a walk or an evening meal when the temperature drops to a bearable level. But of course I’m not a local, I’m a mad Irish woman. So each day, around the time that Dermot went down for his mid-day nap, I would don a pair of runners and take off on foot in the neighbourhood of Chaoyang, wandering without purpose or target until I had clocked up about 10 km.
It’s a wonderful way to soak up the feel of this suburb of the city. One minute I was in the upmarket Indigo shopping mall, the next strolling through Jiang Tai market where stall-holders played cards and mahjong in the listless afternoon and the occasional shopper picked over the exotic range of vegetables and fruits. Women on stools outside their hutong homes called to me in Chinese to ask where I was from as their washing flapped in the light breeze. In 798 Art District the young middle class girls flaunted their designer clothes and a five year old switched seamlessly from Chinese to English as she chatted to her Beijing Daddy about how he had lived longer in China than her Australian mother (“don’t be silly Daddy. I can’t do gan bei. That means “dry glass” and I can’t drink my water that fast.” Dermot in four years time I thought to myself. A citizen of the world.
At one point I wandered off the beaten track towards the eastern perimeter of Beijing, facing only fields, scrublands and a railway line. It always astonishes me that in a city of 20 million people you can find yourself suddenly alone, no skyscrapers or even houses in your field of vision. And then you round a corner and your way is blocked by a half completed apartment complex that seems to have sprung from nowhere. But the canny locals have carved a makeshift path around the perimeter through tumbledown walls and fences and even planted a small kitchen garden. There’s something in the Chinese psyche that finds a way around everything.

Later, at around 5.30 pm each evening, we go out for dinner. Shane and Shan might not miss the heat or air quality in Beijing when they return to Ireland but they will certainly miss the wonderful choice of restaurants within 20 minutes walk of their apartment. As the city has stretched its tentacles out to what was a working class suburb just inside the 4th ring road when Shane moved in four years ago, up-market chain restaurants have opened branches offering great value and quality. Typically a meal for the three of us plus Dermot costs around €40 to €50 including drinks. We ate surrounded by other families – usually  young couples with their one precious child and the husband’s parents. We ran into several neighbours from the apartment block all of whom stopped to chat and compare their offspring with ours noting their respective ages, size. development and even their number of teeth.
On Saturday night we ate in a Korean place – IKI BBQ Dining Bar – with marinated meats cooked at our table in a stylish setting. There are four IKI branches in Beijing including one I’ve visited before in Sanlitun. This one is even nicer and they do a great range of Belgian beers to complement the food.


Sunday it was off to a Middle 8th – a Yunnan restaurant that has opened recently in Indigo Mall, one of a small chain that delivers what it promises, typical Yunnan cuisine. This region is going right up in my estimation. It’s food is spicy but lighter in touch than Sichuan or Hunan cuisine. One of the dishes was “Black Three Chops” which Wei Wei had taught me to make at our last Chinese lesson. I will blog that soon.

On Monday Shane was travelling on business so Shan, Dermot and I went to my old favourite Yuxiang Kitchen Sichuan Restaurant in Lido Square. This is the restaurant where I first tasted the Sichuan Dry-fried Green Beans that led me to starting the blog. We always have green beans when we go there and they do a chilli-free version which Dermot loves. This time we also had a Sichuan take on crispy chilli beef with cumin, sichuan pepper and long green chillies and also goose slow-cooked with strips of mandarin peel, bamboo root and chilli. Figuring out both of those recipes is now on my to do list for the blog. The goose recipe had me dancing a jig with excitement at the flavours.

And then, all to soon, it was Tuesday morning and time for me to head off on my own to Hong Kong. Id’ gotten used to my mornings with Dermot, him clattering around with his cheeky sense of humour, playing silly games with me, nattering on in his version of Chinese with many words now intelligible to his parents if not to me, pulling out books and clambering up to snuggle beside me on the sofa so that I would tell him “Guess how much I love you” or scare him with Red Riding Hood’s wolf (“grandma” has become “nai nai” in our version) or Boris. Every arrival to see him casts the shadow of the inevitable parting but that just makes the experience of time with him all the more intense.
So I was off at the crack of dawn to catch a plane which sat on the runway in Beijing for two and a half hours before takeoff without any explanation. I arrived in Hong Kong late yesterday afternoon and, by the time I had taken  three MTR trains to reach my hotel in Mong Kok, I was disoriented by the change of pace and culture. Where once Hong Kong had seemed more western and familiar with its colonial exoticism now it felt strange – the Chinese characters the same, the sounds so different; young people forming orderly queues for trains reading their Samsung phones while they walk like a scene from “Her”; pedestrians  stopping at traffic lights; cars, taxis and even bikes stopping at traffic lights; fresher air and freer internet and dim sum everywhere.
When I had regrouped I took the MTR over to Hong Kong Island and walked from Admiralty Station in search of Ding Tai Fung in Causeway Bay. I discovered very quickly why locals don’t walk any distance at this time of year, they hop taxis or cars to avoid the humidity and criss-crossing streets by stairs and walkways. However I had picked a night when about 300,000 cheerful young students had taken to the streets in a pro-democracy march and I seemed to be the only one walking against them. But you can’t keep a hungry woman from her xiao long bao and the good humoured protesters and  helpful young policemen made a little space for me to get through.

Today was a day for business meetings but when your meetings are held high in the buildings with some of the best views of Hong Kong and lunch is Dim Sum in the China Club in the old Bank of China Building styled on a traditional tea house in Shanghai , it somehow doesn’t feel like work. I ended the afternoon sitting on the terrace of Isola in the IFC building enjoying the view of Victoria Harbour and sipping a Green Dragon cocktail in honour of our own little year of the dragon child Dermot before wandering back to Mong Kok as night fell and the streets came alive with food stalls.

Victoria Harbour rivals Sydney Harbour in its beauty and, at that very moment, my daughter Claire was preparing to board a plane from Sydney to join me here in the morning, one of those half daft things we scattered families do to get to spend a few days together. At the weekend she and I will travel up to Beijing and her Dad across from ireland so that for just two days we will all be together.
Every reunion casts the shadow of the next goodbye but for tonight as I wait for Claire’s plane to land in Hong Kong, it is all about looking forward to a few special days.