It’s been almost two years since I’ve written a blog post. Where did that time go? I have my excuses. With Shane and Shan relocating from China to Ireland, weekends have been dominated by spending time with Dermot, now aged 4, and his little brother Conan just 9 months old. It’s hard to find time to blog when two little ones are careering around the house, even if Dermot is a willing sous chef and loves to help his Nai Nai cook. Yes, beyond my wildest imaginings, Dermot loves to hop up on a step beside me or his Mum and have jobs to do. It’s not just Chinese food he loves, it’s the magic of making pasta from scratch, the fun of identifying different herbs and spices, the pleasure of seasoning a dish from a height and maybe, sometimes, there might even be dessert…

Meanwhile in Australia Caitlyn is 22 months old and her baby brother is due to arrive around her second birthday. To her I’m “Granny” at the end of a FaceTime connection or for short joyous visits here in Dublin or in Sydney. Being a long distant grandparent never gets easy but it has it’s wonderful moments.

And then there was the “grand projet” – after over 30 years of trying to cook in a cramped kitchen space we finally bit the bullet last June and extended the back of the house to create the kitchen of my dreams. So after 5 months of living in “a squash and a squeeze” while the building works were underway, I now have my island, a gas wok burner, a walk in pantry and a lovely light airy space in which to rediscover my cooking mojo. It’s also a wonderful communal space where several of us can prep and cook food side by side or where Shane and Shan and other family members can gather on stools to chat over a glass or two while I cook. Sometimes I just hand over the cooking to them and wait happily for it to be served.

Calm before cooking up a storm

I had almost given up on writing but for the occasional nudge on line or in person from those friends who still dip into this blog from time to time and enjoy the recipes. You know who you are. Thank you for your patience. And then over the Chinese New Year I attended a masterclass in Chinese cooking by Kwanghi Chan and Mei Chin of slaintchi.com in Cooks Academy and I was bitten by the bug once again.

So below is a recipe for Three Cup Chicken that I served as part of Dermot’s 4th birthday meal earlier this month. I first tasted a variation of this dish in a wonderful Chinese restaurant in Sydney and since then I’ve been trying to track down an authentic recipe.

I asked my daughter-in-law Shan to trace the origins of the dish. The oldest and slightly gruesome version of the story links the recipe to Ningdu in Jiangxi Province and relates to a Chinese national hero, Wen Tianxiang, a general in the late Song Dynasty (960AD – 1279AD). According to the story, General Wen was captured and imprisoned due to his efforts in fighting against the Mongolian invasion. An old lady came to visit General Wen when she learnt he was about to be executed, and she only brought a clay pot, a chicken and a jar of rice wine with her. One of the prison guards was impressed by her compassion and let her visit the General. In prison, she set up a small fire and cooked the chicken with the 3 cups of rice wine in the clay pot with low heat for two hours. Later General Wen was beheaded.

When the prison guard retired and returned to his hometown Ningdu, he cooked the chicken dish on each anniversary of General Wen’s passing, however he changed the recipe from 3 cups of rice wine to 1 cup of wine, 1 cup of lard and 1 cup of soy sauce. The dish became famous over they years and was nominated as one of the main dishes during the 2008 Beijing Olympic banquet.

Nowadays there are many variations of the recipe and the most modern include some or all of the following ingredients – rice wine, soy sauce, sesame oil (instead of lard), sugar, ginger, garlic, spring onions, dried chilli and thai sweet basil. Over the years the Taiwanese seem to have made the recipe their own and I suspect it was they who introduced basil into the recipe.

I found a few recipes on line and adapted them to produce a Shananigan’s version for Dermot’s birthday dinner. It may not be authentic but it follows the wonderful Chinese tradition of adapting recipes to the ingredients at hand. One of the great joys of this recipe is that it can be cooked a little more slowly than stir-fry dishes and let simmer gently while you get on with preparing the rest of the meal. It’s not a particularly spicy dish so it suits young palates and the dried chilli can be reduced or eliminated to taste. It’s a very easy supper dish that’s packed with flavour despite its few ingredients.

I used boned out chicken thigh and leg as I prefer the flavour, moisture and tenderness of the leg meat but you could use breast meat (which I find can be dry). As I couldn’t get hold of thai basil that weekend, I used ordinary basil. The whole garlic cloves add a delicious sweetness to the dish. I don’t normally cook with sesame oil – I just use it for seasoning as it has a low burn point – but if you don’t let the heat get too high it gives a subtle nutty flavour to this dish which I loved. 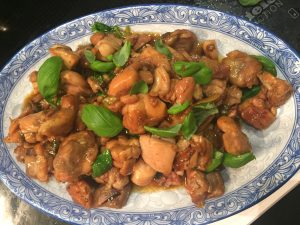