My daughter in law Gao Shan and I have a good thing going on now that she’s my neighbour down the road in Bray. At least once a week she cooks a meal for us in her house and at least once a week I cook for her, Shane and Dermot. While I experiment with new banneton baskets and shawarmas, she cooks wonderful Chinese meals for us and increasingly tries her hand at preparing western dishes. Meanwhile Dermot wanders around under all our feet, “helping” and giving his two year old views on hao chi – good food. He is already a determined carnivore and has become fascinated with my Big Green Egg, helping me sprinkle rub on cuts of meat, salivating as we check at regular intervals to see how the internal temperature is coming on and proclaiming that the Egg is “hot”. He loves his “big egg”.
Last Friday night Shan served us a fabulous dinner of a starter of grilled prawns with mushrooms followed by a main course of spatchcocked quail to celebrate our wedding anniversary. I have never attempted to cook quail – I’m a bit squeamish about the finicky work of preparing them – but Shan found information on line that taught her how to do it and the result was delicious. I wondered what to do for a reprise.


The glorious weather over the weekend encouraged me to fire up the Big Green Egg again and try out my Chinese take on pulled pork on her. Although pulled pork had taken off among the ex-pat community in Beijing before they left, this was the first time Shane and Shan had tried pulled pork cooked at home and served with Chinese pancakes, apple sauce and hoi sin sauce. They and Dermot gave it an overwhelming seal of approval. Dermot seems to have decided that apple sauce is his new favourite thing.

I’ve finally cracked the secret of cooking pulled pork – low and slow for about 9 hours and the time it takes is so worthwhile. You will find my recipe for Duncannon pulled pork and the story behind it here in the blog archives. Yesterday I didn’t bother with injecting the meat but the five spice rub and spritzing it frequently with the apple juice and cider vinegar spray infused the pork with plenty of melting flavour.  A €12 shoulder of pork cooked like this goes a long, long way.
We were wondering what we could do with the leftovers and Shan suggested that I could use them in a variation on my recipe for duck spring rolls. So that is just what I did. Although tired after a long day at work, I enjoyed the calming ritual of preparing the ingredients. The result was Monday night flavour bombs that got this weeks cooking off to a good start.
Now my next trick is to teach Dermot and his Mum how to make ginger biscuits although Shan is ahead of me on that one having made her first ever batch of cookies this weekend. Competitive? Me? Never… 🙂
Pulled Pork Spring Rolls

(Makes about eight spring rolls serving eight as a starter or four as a tasty weekday supper.)
Ingredients 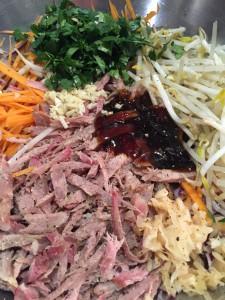 *available in the freezer section of your local Asian market
Preparation 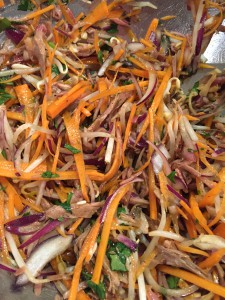