My daughter Claire sent me a random morning thought from Sydney earlier this week. It read “Most people’s first word of the year is ‘happy'” – a cheerful notion evoking images of clinking glasses and reminding me of our celebration of the arrival of 2015 in Australia and, more recently, of Shane, Shan and Dermot’s first Chinese New Year in Ireland.

On those rare occasions when I’m in Australia at the start of a New Year I have my own special way of marking it. I head to the Royal Botanic Gardens before I return home to find the “I wish” statue. There can hardly be a more beautifully located botanic gardens on this earth, perched as they are over Sydney Harbour and providing a still place, a peaceful escape from the noise and searing summer heat of the city and a breathing lung at its heart. The simple sculpture I go in search of is by Czechoslovakian artist Arthur Fleischman and has been in the gardens since 1946 where it marks the site of the first Wishing Tree. 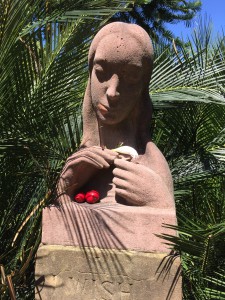 The first time I stumbled on my wishing girl was on a visit to Sydney in 1999. That was long before I had a daughter living in Australia or a son in China and I doubted I would have an opportunity to return to Australia in my life time. But something about the simple sense of yearning the statue conveyed struck me like a powerful memory of the future and I tried to capture it in a tiny photo that has sat ever since on my window ledge in Duncannon.

Since then, as my children’s lives took their own twists and turns, my wishing girl has become a symbol for me of the conflicted emotions of longing for home and missing those we leave behind in an adopted country. I’ve returned to Sydney several times and each time I seek her out, touch her cool stone and pause in the still shade that surround her to reflect on what is important in my life right then. This January my prayers were many and heartfelt… that Claire will have a safe delivery of a healthy baby in April and enjoy the happiness of motherhood… that Shane, Shan and Dermot will settle into their new life in Ireland despite missing the family and friends they leave behind in China… and for well-being for other friends and family important to me.

Fast-forward to early March and Claire’s baby is due just seven weeks from today. The waiting, wishing and hoping have become an urgent knot in the pit of my stomach. At the same time I’m adapting to the joy of having SS&D living just down the road and the ordinary, extraordinary pleasures of grand-parenting. It’s time to start writing the blog more regularly and to capture the moods and moments of a special time.

One of my best memories of our Christmas/ New Year trip to Australia is of ringing in 2015 at Culburra Beach on the South Coast of New South Wales while celebrating our son-in-law Mike’s birthday which falls on new Year’s Eve. We had decamped down there to two beach houses overlooking the ocean where dolphins cavort in the evening sun – our house was called “Sea La Vie” while Shane, Shan, her MaMa and Dermot were down the road in “Time to Unwind”. Various friends of Claire and Mike, couples with young children, had taken other apartments nearby and the combined New Year and  birthday celebrations were held on our deck.

For a once in a lifetime opportunity to spend a New Year’s Eve with all of us together including Shan’s MaMa, it seemed fitting to import some Chinese new year traditions into our celebrations. So Shan and MaMa took charge and put together a Chinese inspired barbecue which featured platters of Chinese pot-sticker dumplings, lamb chuan’r kebabs flavoured with cumin and chilli and Yunnan style, barbecued whole barramundi fish. The boys manned the barbecues in true Aussie style.

Dumplings symbolise good luck, fortune and family togetherness.  They are served as the first meal of the New Year and before members of a family depart on a journey to remind them that family wraps itself around you wherever you are. This time MaMa made up two kinds of filling – traditional pork and cabbage and beef with carrot. – She, Shan and Shane wrapped the dumplings at their house and brought them along in tray loads for me to cook pot-sticker style just before serving. You will find lots of similar dumpling recipes on the blog starting with the link here.

MaMa’s delicious lamb kebabs combined the excellent flavour of Australian lamb with the the spices of her home town in Urumqi – the diced lamb was marinated in onion and tomato and scattered with cumin and chilli before serving. We will try them out on the Big Green Egg soon.

My contribution to proceedings was to make the desserts.  The birthday cake, a special request from Mike, was a chocolate cheese cake. I used this recipe by Nigella Lawson and also made a back up Chocolate Ripple Cheesecake from a Mary Berry recipe and a large summer berry pavlova.

But it was Shan’s barbecued fish which was the highlight of the meal. As Shan says:

“Having a whole fish at the Chinese New Year’s Eve or New Year’s Day is very important. It has an auspicious meaning that sharing a whole fish with one’s family will bring luck and fortune to the whole family for the coming new year. This is because Chinese word for fish ‘yu‘ has the same pronunciation as the word ‘abundance’. It is important to have the whole fish including the head and tail which means a good year from start to end. Superstition really but it is so common that people don’t even think about it, it is just a ‘must have’ dish for new year or any big family reunion events.” Another part of the tradition is that the whole fish is never turned over on the plate once served because of the negative association with the turning over of a fishing boat and flipped fortunes. 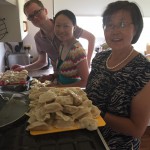 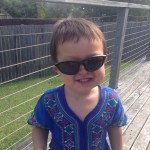 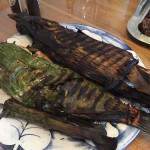 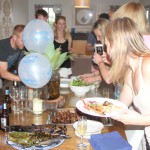 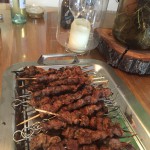 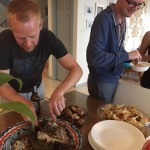 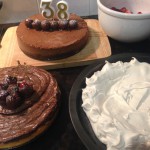 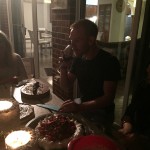 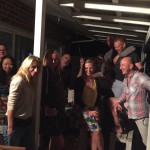 Shan calls her fish recipe  Yunnan Xiang Mao Kao Yu. Yunnan is a province in the very South West of China which shares a border with Burma,Vietnam and Laos, hence you see lemon grass, a common ingredient in South East Asian countries in this dish. Xiang Mao is the Chinese word for lemongrass, Kao means barbecue or grill, Yu is fish.

Now that spring is in the air here in Ireland and it’s time to dust off your barbecue or Big Green Egg, I thought you might like to experiment with Shan’s recipe. It doesn’t have detailed measurements for its ingredients. Chinese cooks don’t work that way so Shan has written down below the principles of what she did and the rough amounts of ingredients she used. Feel free to play around with it until you get the balance of flavours that suits your preference and liking for chilli heat. 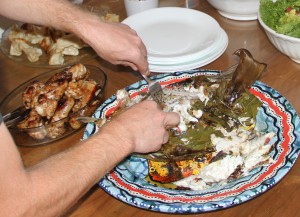 The above measurements are indicative, the aim is that you have enough mix to stuff the whole fish, in its body and slits on both sides.

Fresh water fish can also be used in this recipe but it usually has a muddy taste and more bones. In Australia we used Barramundi fish. A whole salmon could also be used.

Shan would suggest making the mix slightly less salty if you are using sea fish, as they tend to taste a tiny bit saltier the fresh water fish. Add black pepper into the mix if you are a pepper lover!