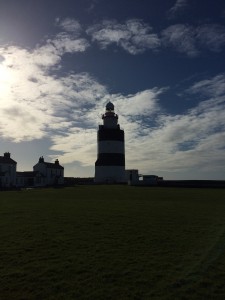 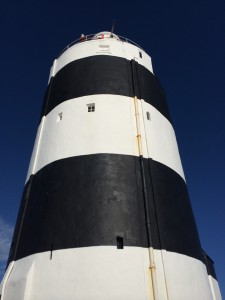 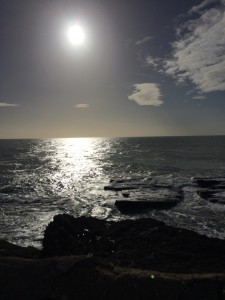 When I was young one of our favourite Sunday drives was from our home in Wexford town to Hook Head. My three brothers and I would pile into the back of the car, all elbows and knees and arguments about who would have to sit “in the middle”. Released from the car we would race around the headland and clamber over the rocks as the fierce water surged, going as close to the edge as we dared while the gentle light house stood guard over us. There was no Hook Lighthouse cafe then but if we were good we might stop for an ice-cream in Slea Head on the way home.

As a child Hook Head mesmerised me, the awesome power of the sea, the still place in the shelter of the lighthouse, the steady flashing of the light visible from afar, the slippery flat rocks that felt secure and scary at the same time. It was the wildest and most remote place in my young life, a marked contrast to the calmer beauty of Curracloe and Ballinesker beaches. And the lighthouse – that beacon of hope and security, that sweeping light that scanned the moody sea with yearning and wander lust – I could watch it for hours.

So in 1999 a much older and better-travelled me took just 15 minutes to decide to purchase, on pure impulse, a little holiday home in Duncannon with a view of the sea and a direct line of sight to the lighthouse, a house I had not even been inside. And now that light beats out its rhythm on my dormer windows and I can sit in the kitchen and gaze out at it on a moonlit night when I am down there at weekends. There’s something about it that stills my soul.

My son Shane inherited my love of lighthouses. Like me he searches them out wherever he is in the world and in the 15 years he has been visiting Duncannon, Hook has become his special place. He brought Shan there on her first visit to Ireland. It’s where they took Dermot to mark Shane’s first Father’s Day. On Christmas Day 2013 they took Shan’s visiting Chinese family down to the Hook for a bracing pre-dinner walk. We nearly lost a few of them to the elements such was their fascination with the place, coming as they do from Urumqi, the most inland regional capital in China.

And now it’s Dermot’s turn. Just turned two and recently arrived from Beijing to live in Ireland he remembers it from earlier visits. “Deng ta 灯塔” he calls over and over as he tries to explain its magic to me in his own unique combination of Chinese, English and “Dermish”. “Deng ta” he yells if he sees any photo or painting it, recognising not just any lighthouse but his very own light house. He loves to visit it, hates to leave and wants to return the very next day. When his MaMa had shown him how he could see the light from his Duncannon bedroom window he got sad when day light came and the light was “aw gon”. Back in the city streets of Dublin he searches for lighthouse like shapes in street lamps and buildings and talks about it incessantly.

Yesterday I walked him around our house as he pointed out all the extended family he now recognises – MaMa, DaDa, YeYe, NaiNai, Claire, Mikey, Tai Tai, Jodie, hesitating only when he came to the photo of my Dad. I realised with a jolt how much my Dad would have loved getting to know this little man who loves lighthouses and cars in almost equal measure. What’s bred in the bone…

He is a near neighbour now is our Dermot, living just 5 minutes drive down the road from us in Bray. I still can’t get used to the joy of the proximity, the endless possibilities to plan little outings, the goodbyes that are no longer a wrench from the heart, the sleepovers – he had his first with us this week, the babble and chatter in two languages (or is it three) – as ordinary a grandparent relationship as it gets but for me, after two years of FaceTime and airport partings, extraordinary.

Cooking is bred in my daughter in law Shan’s bones and an unexpected bonus of their arrival to live in Ireland is impromptu invites to dinner in their new home where she puts together meals that set our tastebuds alight and transport us back to Beijing. I suspect Dermot may inherit that from her too. Already one of his favourite things to do is to leaf through my Chinese cookery books licking his lips at examples of hao chi – tasty food – and telling me the names of the main ingredients.

Shan never needs a cookbook of course. She just comes up with the dishes by instinct with whatever ingredients are to hand. Last night she served us a lip-tingling Sichuan style chicken dish that was so good that I got her to write down the recipe before she forgot it. Here it is. 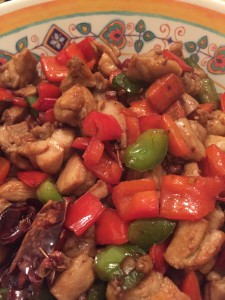 You can use chicken breast meat if thigh is not available and groundnut oil instead of sunflower oil. You can use all fresh or all dried chillies, whatever you have handy and adjust the chilli heat to taste.

Thank you Shan for the recipe, the inspiration and getting me blog-writing again, Shane for the photos of Hook Head taken last Monday and Dermot well just for being Dermot.