Day 2 of #NaiNaiVisit and I’m fighting off jet-lag, falling asleep at odd moments in the middle of the day, drifting off on the sofa as soon as we get back from dinner and awake writing blog posts at 2.30 am. Between naps I brushed up on my culinary Chinese from Sybaritica. I love John’s posts from the far reaches of Northern Canada. I’ve learnt a lot about Chinese food from him and his Culinary Chinese blog posts are an invaluable aid to eating out here.

For breakfast today we had jiam bing – a Bejing pancake folded and layered with spices which Shan picked up from the local shop for a few kuai, the equivalent of about 6oc. Later we took a leisurely stroll around the neighbourhood here in Upper East Beijing. It’s easy to forget you are in a city of 21 million people in these tree-lined streets and, on a sunny Spring Sunday, the local park could be any suburban park in the world, the sheen of greenness not yet parched by the summer sun and trees lining the skyline wherever you look.

A walk in the park with YeYe and NaiNai

We had a quick lunch in Element Fresh near the Lido Centre. My ex-patriate son sometimes has a longing for an English/Irish/American breakfast but the quality and value is patchy in these parts. I stuck with Asian options. The Lido Centre is where we had the Chinese meal that led me to starting the blog with this post. More recently the Lido Hotel has become notorious for being the temporary home to the Chinese relatives of those on board the doomed flight MH370. They have left now, their questions about the fate of their relatives unanswered, and the security detail has gone too.

Shan’s heat-seeking ability to find interesting restaurants led us to Taikiku for an early dinner – a Japanese fusion restaurant in Dongfang Donglu about 30 minutes walk from us in the Chaoyang District. I can only find one English language review on line in That’s Beijing.

We were joined by Shane and Shan’s friend Carl, himself an occasional restaurant reviewer, and led across slate steps past a striking water feature to our private wood-panelled dining room where two Korean style BBQs were sunk into the dining table with seating for the six of us including Dermot in a high chair.

Shan ordered in Chinese and the staff entered the orders on iPads which transmitted them straight to the kitchen. The option we went for was “all you can eat” from the a la carte menu, with a few of the more expensive items being out of bounds. The owner imports his own Waygu beef from Australia and the restaurant has earned a reputation locally for the quality of its meats and sashimi.

The dishes came in waves so fast that I found it hard to note them all. They included:

Vietnamese spring roll with avocado and shrimp, Waygu beef sashimi, sashimi of tuna and scallops and later sea urchin, all of first grade quality, two salads – one of avocado and asparagus, the other of organic vegetables, a stir-fried vegetable dish and a kimchee hot pot brimful of seafood and soba noodles. 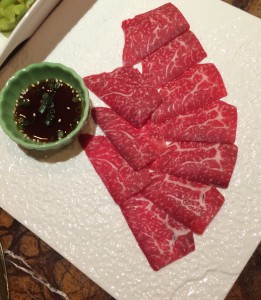 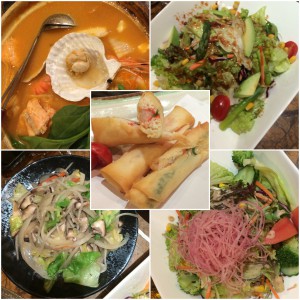 A selection of side dishes at Taikiku

On the BBQ at the table Shan and I cooked whole fresh shrimp, platters of Waygu Beef, beef tongue, oysters and – a first for me – pork intestines chewy, slightly aromatic and tasty. The Waygu beef came thinly sliced so that you could cook it in a few moments or in long strands that you could cut into bite size pieces with a scissors before cooking. The cuts we had were short-rib and dragon cut (inside skirt). 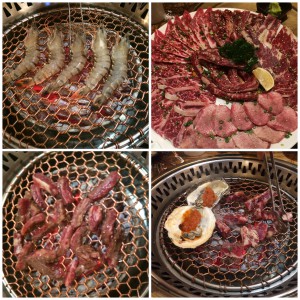 On the BBQ at Taikiku

Dermot’s favourite dish was grilled eel although he was partial to the noodles from the kimchee hot pot too. 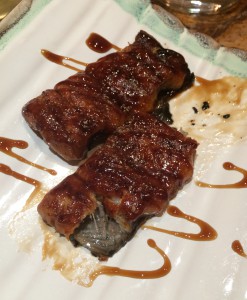 Dermot nibbled the eel before I got a photo!

All of this came washed down with seemingly endless quantities of sake, green tea and Japanese beer. Despite the quantity of food it was all very light and easy to digest because we had no starchy dishes such as rice or potatoes.

The bill for all five of us was 1262 RMB or about €145. There was no charge for Dermot as he is under three and, bless him, he is remarkably patient at adult dinners once you allow him join in the food and the conversation and explore a bit at the end. 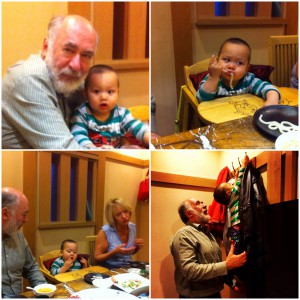 Joining in the fun

As a footnote I had my first experience of a Japanese toilet there this evening with heated seats, jets that can be directed at the touch of the button to various parts of the anatomy with controlled pressure and a built in dryer – a far cry from some of my more traditional Chinese toilet experiences but that’s a whole other blogpost. 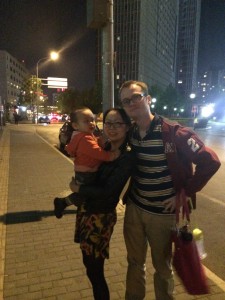 While Shane and Shane took Dermot home to bed by taxi, we walked home through the balmy suburban streets and I soaked up the atmosphere of neon lit restaurants, Sunday evening bustle and men fishing by flashlight on the banks of a murky canal. Because I had being studying Sybaritca’s blog post on the Mandarin characters for Beijing, I seemed to see them wherever I looked in the names of restaurants and hotels. Bei Jing – Northern Capital – a city that works its way under your skin and into your heart. 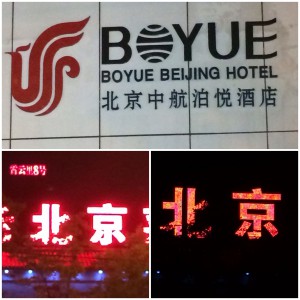 So many ways to say Beijing