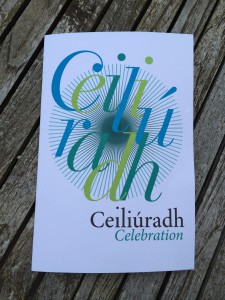 It’s strange the way good things happen. On Friday afternoon last, a quiet weekend in prospect, I dropped into The Corkscrew on Chatham Row and spotted that signed copies of Neven Maguire’s MacNean Restaurant Cookbook were on special offer for €15. I hopped on Twitter to broadcast this good news – this great cookbook includes lots of the recipes that feature in Neven’s latest series on RTE in which he makes his more complex dishes accessible and gives you the confidence that you can recreate them at home. At that price his book is a steal and includes recommendations for wines to match the recipes which you can pick up at The Corkscrew. But I digress…
I don’t usually visit Twitter at that time on a Friday afternoon but skimming through my time line I spotted a tweet from @sarahbakercooks with a competition for a free cancellation place at a barbecue class at Cloughjordan House the following day. Now I’ve been meaning to visit that cookery school for some time so the prospect of a barbecue course, just as I need inspiration to get going on my Big Green Egg for the summer season – was enough to make me willing to drop everything and re-arrange my weekend. And so when Sarah tweeted later that evening that I had won the place I did just that and headed off at the crack of dawn on Saturday morning to North Tipperary. Derry came along to take the photos.


The course was given by Brendan of BBQ Joe who specialises in low ‘n slow cooking. Ireland being such a small place it turned out that I had met Brendan once before when he was restaurant manager at Sheen Falls in Kenmare. He has now re-invented himself and caters for weddings and other large events, cooking the best of Irish produce on his own custom built charcoal grills, smokers and pits. Watch out for him later this year when he barbecues on a grand scale for visiting american footballers and their fans.
I was delighted when we arrived to discover that he would be cooking on a Grill Dome. This Kamado style ceramic barbecue is very similar in concept and performance to the Big Green Egg so I felt right at home. I remain devoted to my Egg but it’s great to know that there are alternative products on the market that fulfil a similar function.
This was Brendan’s first cookery demo and I loved his relaxed and informal style as he shared his passion for barbecuing and the tips and insights he has picked up as he builds up his business. He has travelled widely to study techniques in places as different as Texas, Turkey and Georgia.  He works alongside professional chefs but brings his own un-cheffy and intuitive approach to producing tasty food for sharing.

Brendan took some time at the beginning of the class to talk about different types of charcoal fuel and ways of lighting your barbecue – a “weed burner” has been added to my wish list as a result. He confirmed that it’s important to use the best quality lump wood charcoal you can get hold of – the heavier and denser the better. I’ve been using Big Green Egg Organic Lump Charcoal and Big K Restaurant Charcoal with good results. Both are available for delivery from A Room Outside in Limerick. Brendan also encourages the use of local wood shavings as a way of adding flavour – a handful of oak wood shavings or left over wood chips from whiskey barrels from your local distillery can work wonders. My next door neighbour in Duncannon left me in a bag of oak wood shavings  recently which I will now put to good use.
Then he spent some time on the basics of putting together a good BBQ Rub and BBQ Sauce as well as how to prepare a Charcoal Salt which is a nifty way of adding a little delicate charcoal flavour to your meats.

First up in the cooking, Brendan showed us how to prepare pulled pork – that quintessential barbecue dish beloved of Texans. While it cooked away low and slow, and Brendan explained the internal temperature “plateau” at around 70 degrees c which scares the wits out of most wannabe BBQ chefs the first time we encounter it, he produced one he prepared earlier (as all good cookery teachers do!) and showed us how to serve it in buns mixed with barbecue sauce and layered with a fresh crisp coleslaw including fennel and some paprika mayonnaise. That was our brunch – or breakfast in my case.

The edge taken off our appetite we went on to prepare rib eye steaks on the bone, each about 6 cms thick. We seasoned them simply with charcoal salt, cooked them over high direct heat, flipping them often and rested them on a board dressing of oil, parsley, pepper, garlic and chilli. The trick here lay in the quality of the well-aged steak and simple seasonings that allowed the flavour of the meat to come through.

We tried out a few other dishes to prove the point that barbecues don’t have to be all about expensive meats. A pork bomb made with minced pork and stuffed with sauerkraut and wrapped in a bacon lattice held its shape beautifully and worked well with barbecue sauce.

Chicken koftas made with thigh meat were glazed with pomegranate molasses and served with a satay sauce and some tzatziki.

Prawns and chorizo made an eye catching kebab needing little more than lime juice and zest to dress them.

Salmon was cooked skinless on a buttered tray and drizzled with flavoured honey and red pepper corns or lime to add a little flavour.

In barbecues the focus is firmly on the protein with side dishes playing a supporting role but we prepared portobello mushrooms with a filling of baba ganoush made from barbecued aubergine which would keep many a vegetarian happy. It can be teamed with haloumi cheese and roasted peppers for a more filling vegetarian option.


Side dishes were designed to add colour and we made a mango salsa and feta and watermelon salad that provided a light and refreshing contrast to the main event.

All through the day Brendan shared great tips such as using half an onion on a fork dipped in rapeseed oil, star anise, bay leaf and peppercorns as a “brush” for your grill, using apple juice and cider vinegar as a spray to moisten your meat, oiling the barbecue not the meat, cleaning your griddle with a wedge of lime, making board dressings… all of these will stay with me as I experiment in the coming months and try to develop my own personal style. “Taste and correct” will become my BBQ mantra. He taught us how to make the best use of space on the grill and sequence our dishes so that we got the maximum value from our charcoal.
As the day wore on and we got chatting to the other participants on the course, I was chuffed to discover that Greg from the nearby eco-village in Cloughjordan had used my recipe for turkey on the Big Green Egg to prepare Christmas dinner for his family and friends and it had worked for him too. Sometimes when you write a food blog you wonder if anyone out there is reading it and it’s so lovely to meet someone who has stumbled on it when googling for a recipe. Thank you Greg for making my day.
Cloughjordan House Cookery School is a very pleasant space in which to work for and is particularly popular as a venue for transition and fifth year students  where cooking is combined with gathering fresh produce from the community farm. The main house is 400 years old and also offers bed and breakfast and a wedding venue. Some of the participants in the course had stayed over the night before and I look forward to returning for a more leisurely visit and a taste of Sarah and Peter’s hospitality.
Thank you Sarah and Peter of Cloughjordan House Cookery School and  Brendan of BBQ Joe for a great day out and lots of inspiration to which I hope to give a Chinese twist in weeks to come.
Meanwhile to whet your appetite here’s Brendan’s basic recipe for BBQ Sauce which can be adapted to personal taste. For instance you can spice it up with chilli powder if you wish
BBQ Joe’s Sauce
Ingredients

Method
Combine all ingredients in a pot. Bring to a simmer over gentle heat to ensure the sugar has dissolved. Blitz with a hand blender to a smooth consistency.