Moments don’t come much sweeter.
Throughout the 18 hour journey from Dublin I quelled my nervous anticipation about meeting Dermot again. I practised my “happy face” to mask my disappointment when he reacted warily to me. I warned myself to hold back, not crowd him or drown him in slobbery kisses while he connected the face and the voice with a pixellating image he is vaguely aware of once a week on an iPad and perhaps some tiny memory of his visit to Ireland nearly five months ago.
Shane was at Beijing International Airport to greet me with a hug. MaMa, my quin jia, had a bowl of noodle soup on the table when I was barely in the door of their 21st floor apartment. Shan was waiting to show me my room (Dermot’s room really) . More hugs and smiles. I felt a swooshing release of tension at arriving at my Beijing home. Dermot was having his afternoon nap.
So I waited some more, weary after the journey and with the surreal sense that I had come all this way and perhaps my beloved grandson was a figment of my imagination despite the baby paraphernalia all about. I snuck a look at his sleeping form to reassure myself . He was indeed real.
An hour later a sleepy whimper… I held back as Shane went in to release him from his sleeping bag and lift him over the bars of his cot. Surfacing out of sleep he turned to me, frowned for a moment as the wheels whirred in his little brain and then broke into excited burbles and giggles of pleasure, reaching into my arms.
Moments don’t come much sweeter and Shane had an iPhone in hand to capture it.


What is it with an eight month old baby? a familiar voice, a memory of touch and smell, of me crooning to him out of tune in the early hours in Duncannon last June, a recognition of his father in me? All I know is that when our eyes locked we were connected again as if by an invisible thread. For the next hour he examined me closely, my face, my hands, my finger nails painted a suitable Chinese red “ooh, tasty…”, my rings, my watch, as if he too wanted to confirm that I was real.
And now we are pals again, getting to know the Gruffalo and a noisy toy guitar, him careering around the apartment in his walker for nai nai hugs – our very own “Derminator”, plopped on the floor of his play room with my quin jia and a neighbouring nai nai with her one year old grandson PePe, swapping words using Google Translate so that his grannies can tell him the names of animals and numbers in Mandarin and English. And when we are on Skype to his Grandad in Dublin, he cranes his neck to look back up at me and stares intently at the iPad screen as if to say “ah, now I’m beginning to get this Skype lark.”
Shan’s MaMa, my quin jia, is a special woman, warm, generous and with an engaging sense of fun. We have found a way of making sense to one another when alone and then Shan and Shane fill the gaps when they are at home. She has been trying out pizzas in their tiny electric oven since Shane introduced her to the concept at a local Italian here in Beijing and she is very enthusiastic about helping me make them in Duncannon at Christmas.
So here, as promised, are the three other toppings I tried with the Pizza Stone on the Big Green Egg recently. I made these using the Birra Moretti base and cooking method set out in the last post. I would love some more  suggestions for toppings that might appeal to my Chinese visitors in December.
Butternut Squash and Goat’s Cheese Pizza
This recipe came from my Italian friend Solange. She and Agustin based it on their favourite pizza in her local pizzeria in Pontadera, Italy. It’s what the Italians call a “white pizza” as it doesn’t have a tomato base. 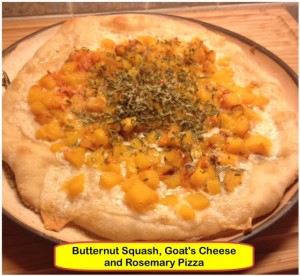 I used this goat’s cheese that Solange buys in Ireland.

Potato, Pancetta and Shiitake Pizza
Pizza with potato and bacon topping has always been one of my favourites at Gotham Cafe in South Anne St., Dublin where it is called a “Flatiron”. I created my own variation of it and added in some sautéed Irish shiitake mushrooms which I found in The Happy Pear in Greystones. This year is a wonderful year for wild Irish mushrooms so ceps or other native varieties would also work. This is also a “white pizza”. 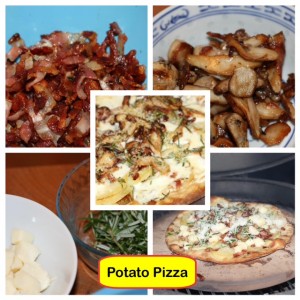 Roasted Peppers, Mozzarella and Basil Pizza
To be honest this was just a way of using up left overs from the other three pizzas I made that weekend and a reminder of how simple and delicious a pizza can be. 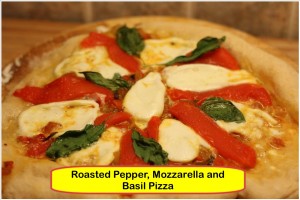 Enjoy! Next up is cooking lessons from Beijing.