I’m in Dubai Airport waiting to board a flight for Beijing. As I sit here between two worlds in the surreal environment that is the transit area of a major international airport, the temperature is a sauna-like 30 degrees at 2 in the morning and a half moon is sitting like a smiley in the sky, glowing red from the dessert sands. In this part of the world I can’t be too far from the old silk road along which travellers took many moons to reach their destination in places like Xinjiang province in remote, northwest China where my daughter in law Shan was born.
Here the camels have been replaced by A380 planes. Big, lumbering beasts of burden that become suddenly graceful when they soar into the air.
Would you look at who’s waiting for me when I get to my destination – Dermot, camping in the living room so that his Nai Nai can take over his room.


Over the next two weeks I will get to spend lots of time with him, Shane, Shan and MaMa. I’m travelling to Beijing to speak at the Beijing Forum at Peking University next weekend but, of course, I’m adding on lots of extra days to have time with them.
I also hope to take some more Chinese cooking lessons, including spending whole days with Shan’s MaMa. She and I don’t yet have language in common but we can communicate through a mutual love of food and cooking. I’ve been thinking about how I can return the favour when she and her sisters in law and nieces visit Ireland for Shane and Shan’s wedding in December.
MaMa enjoyed showing me how to make noodles and dumplings the last time I was in Beijing so I thought that it could be fun to spend a day making pizza with her and the other ladies of the family. Although, come to think of it, with nine Chinese girls and women, ranging from age 3 upwards in our little house in Duncannon, none of whom speak English except Shan, it might have to be a demo rather than a hands on lesson!
Right down to the youngest girl, Chinese women are naturals at working with dough – flatbread, noodles and dumplings get whipped up from scratch every day – but they don’t have access to ovens and don’t use yeast. I think they would love the rhythm of working with yeast dough and stretching it to make a perfect thin, pizza round.
So cue experiment time. What happens if you take a very Italian pizza base, a topping with the flavours of Xinjiang province loved by Shan’s family and a Big Green Egg and put them together? Magic is the answer. Even if cooked outside in the dark in Duncannon, during a lightning storm, on a wild Autumn evening.
I’d better confess that I had never made a pizza base before last weekend so I’m only a learner pizziola (have I even spelt that right??) but the learning is great fun, and by the fourth pizza, I had almost got the base into a perfect round and I had learned that the best temperature to cook a pizza on the Big Green Egg is somewhere between 220 and 240 degrees C – any hotter and the base is inclined to burn. But, despite my amateurish efforts, the crispiness of the base cooked on the pizza stone in the Egg was just fantastic and I have a bit of time between now and Christmas to improve my technique and experiment with other toppings.
First the pizza base. I did lots of Twitter research and came upon the recipe below which uses an Italian beer, Birra Moretti to moisten the dough. I love working with yeast dough and find it very therapeutic. The use of beer stiffens the dough and makes it more elastic. As a result I was able to make a very thin base. I found the recipe here on the Caldesi.com website. The beer goes well served with the pizza too 🙂
Birra Moretti Pizza Base
(Makes 4 pizzas.)
Ingredients

Special Tomato Sauce
I found this recipe in an old cookbook of  mine Ultimate Recipes: Italian. It can be used as a base for lots of different toppings and will keep well in a screw top jar in the fridge for up to a week.
Ingredients 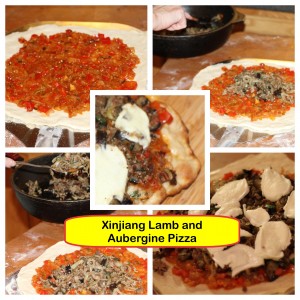 I love this topping which is a meal in itself and brings back memories of the flavours of Xinjinag. Substitute naan bread for the pizza base and goats cheese or a thick yoghurt for the mozzarella and I could be transported back to Turpan on a hot sunny day watching the Muslim Uighur women seasoning their lamb with cumin and coriander. I based it on a pizza topping in my Ultimate Italian Recipes book.
Ingredients

I think my Chinese friends will love this topping but they might also enjoy three others I tried last weekend: butternut squash, goats cheese and pumpkin; potato and pancetta; roasted peppers and mozzarella – topping recipes to follow.


If you have a favourite topping that you think I should try out with them please share it with me. Now my flight has been just called so I have to run. And it’s an A380. Byeee….