Forty one years. It’s not a very auspicious anniversary. If it was a marriage you would find it hard to identify the appropriate gift – land I believe. In China the number would probably be regarded as unlucky because it includes a four. But the thought struck me when I woke up this morning. Forty one years ago to this day I crossed the threshold of the Civil Service Commission and joined the Irish civil service.
I had just turned 17 (I know you can do the sums but I don’t mind). I had no real intention of becoming a civil servant, I just did the “Junior Ex” exams to get a day off school. I travelled up from Wexford with my Mammy and Daddy, my three younger brothers, my Granny and Grandad and my Great Aunt Bella. All of them were crying about the prospect of leaving me behind in Dublin, clueless about how to get around from my hostel in Ranelagh. They were right – the first time I tried to walk home from my office in Hume House in Ballsbridge I ended up in Ringsend because I turned right instead of left at the canal.
I remember every detail of that day – the drab beige walls in the Commission’s office in Parnell Square, the cramped waiting room, the cursory interview – They: “What kind of job do you want to do?” Me: “I want to work with people” (so they put me in the Revenue Commissioners) – pulling up in the car outside Dublin Castle and poring over a map to make sure that we had the right location, trying to figure out what bus I would take to town and what small change I would need to pay for my ticket, running to leap on the  back step of the 46A for my first ever journey alone, the unfamiliar “ding ding” to alert the driver, meeting my new friend Mary from Tipperary, she even younger than me and sharing our terror at the world of work, but excited at the same time at the heady prospect of freedom and a wage packet of our own.
That was the year Ireland joined the European Community. Dublin was a sleepy place catching up with the sixties, the civil service was about to be lurched into action by the impact of our EC membership. The marriage bar was still intact. My pay was less than the guys taken on at the same time as me. I only planned staying a year…
The next 37 years passed in a whirl. Over that time Ireland changed as we grew in confidence with our EU membership, shook off the shackles of dependence on our nearest neighbour, found our feet as a nation and almost lost them again. I changed. I went from being a naive culchee to a city slicker (well kind of), to wife and mother, to senior civil servant and now, four years out the other side, I’ve had fun reinventing again. And it all seems to have happened in a flash. As for the one year that became 37, I don’t regret a moment. For all the knocking it gets, the public service gave me a fantastic career across eight government departments and a huge learning opportunity.
Anyway all that came to mind because I’ve been trying to put together a paper to deliver at the Beijing Forum at the beginning of October on how Europe has transformed itself in an ever changing world and working on it has triggered a trip down memory lane. More of that when I get to Beijing in a little over a week’s time (and to see Shane and Shan and my gorgeous grandson Dermot. Wheeeeee….). But meanwhile my cooking has suffered as I get lost in research.
So here is just a simple recipe to keep you going while I find time to write up my other culinary experiments of recent weeks. This is the starter I plan serving to 17 of us on Christmas day including 9 of Shan’s family over from China.
I adapted the recipe from one for frozen prawns on GrillGrrl.com – an enjoyable blog about adventures of a girl on the grill. The mild smoky flavour of the prawns adds a touch of the exotic to an otherwise simple dish. It can be prepared well in advance and it’s cheerful colours brighten up the meal. I smoked the prawns on the Big Green Egg but I’m sure there are lots of other ways of smoking them and the recipe would also work with unsmoked prawns or crabmeat. You could add a little finely chopped chilli and ginger if you wanted to add an extra kick but don’t overpower the smokiness.
Smoked Prawn Salad from the Big Green Egg 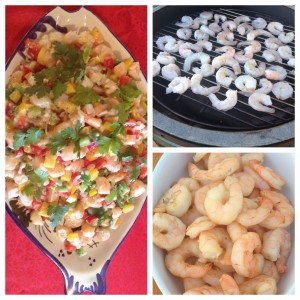 You can serve this on a platter to share or in individual serving dishes. Enjoy.