I’ve been going through the blog this weekend to decide which recipes to include in the Taste of China Demo at Donnybrook Fair Cookery School on the evening of Wednesday 3rd July when chef Robert Jacob will cook a selection of Chinese dishes while I talk through the techniques of Chinese cooking and regional variations in cuisine.
Robert is one of the great “foodie” friends I’ve made through the blog and Twitter. He was a fashion designer before he became a chef and has worked with Ross Lewis in Chapter One and Paul Kelly in The Merrion. You can read Marie Claire Digby’s recent True Character profile of him for the Irish Times Magazine here. Before we got to know one another I attended a course he gave in knife skills so I owe any ability I have to dice and slice to him.
It’s a real privilege to team up with Robert for this class which is a first for Shananigans.
It’s less than 11 months since I started the blog and it’s always intriguing to see what recipes readers return to again and again. It gives me particular pleasure when I discover that one of the many lovely people I have met though the blog has taken one of the recipes and given it her own twist.
The crispy chilli beef recipe that I posted last November has been consistently one of the most popular recipes. Before I started the blog I would occasionally order something similar from the local Chinese takeaway but I always regretted it afterwards because it left me feeling heavy and bloated. So I had set out to create a lighter version at home using egg white and potato flour for the batter which makes it suitable for coeliacs and the wheat intolerant.
One of my most supportive readers Marie McKenna has taken the recipe a step further by adding pak choi. Sometimes she substitutes chicken for the beef or adds whatever other vegetables she has to hand. She sent me the two photos below of her results which I have reproduced with her permission.
I made crispy chilli beef for dinner for last night and we really loved the addition of the pak choi so I’ve tweaked the recipe to include it and made a few other minor changes. Thank you Marie for the inspiration and the photos. That’s what these recipes are for – to be shared and adapted.
Shananigans Crispy Chilli Beef – Xiang ciu niu rou pian – 香脆牛肉片 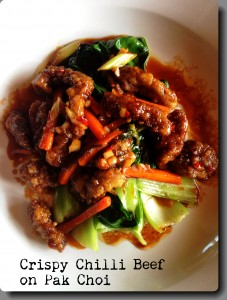 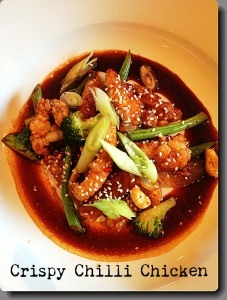 Photo courtesy of Marie McKenna
You can use almost any steak in this dish. At the start I used to use fillet steak but it is not necessary to have such an expensive cut. I find bavette of beef (also known as flank steak), which is available at good butchers, is a drier cut which responds particularly well to this recipe. It is also much better value. Sirloin works well and last night I used rib eye because I had two left over from a BBQ during the week.
Chicken thigh or breast can be used instead of beef and the chicken strips will take a little less time to cook.
Chinkiang Chinese black vinegar is readily available in all Asian supermarkets here and in some good grocers. It has excellent flavour. Last night I used aged Chinese vinegar – lao chen cu – which I brought back from Beijing. It is the type used as a dipping sauce for dumplings in China. The result was tangy and delicious. If you cant get hold of Chinese vinegar, use aged balsamic vinegar. The result wont be quite as authentic but it will still taste good.
If you are not using pak choi, you could serve this with a green vegetable such as steamed tender stem broccoli, or add a few green beans or broccoli florets to the stir fry.