Home » Chinese kitchen essentials » Getting to know Chinese Ingredients and their uses
May 19, 2013

Getting to know Chinese Ingredients and their uses

Well its about time that I revealed the answers to the last competition on the blog and some of the things I learned along the way – like the fact that two of the ingredients were not what I thought they were and it took readers of my blog to put me straight! Here are the answers to those fiendish questions. 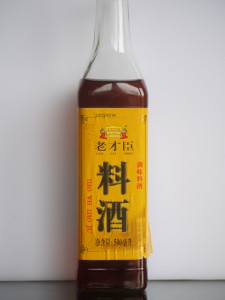 Cooking wine  – liao jiu – is an essential seasoning in Chinese cooking.  The rice wine used in cooking is quite young and is about 15% by volume.It is often used to “purify”or marinade  meat or fish before cooking and to improve the flavour.

Higher grade rice wine is called hua diao. Here in Ireland I’ve been using Shaoxing cooking wine – shooxin hua diao jiu – which comes from an area outside Shanghai which is famous for its wines. It is readily available in Asian markets.

You will find cooking wine popping up in many of the recipes on the blog, even to marinade the small amount of minced pork used in fried green beans or fish fragrant aubergines. Here’s one recipe I used it in a while back – Sichuan Stir-fried Duck (and it’s strange to re-read that post and be reminded of a time before baby Dermot arrived into our lives.) In a pinch substitute dry sherry or a little white wine. 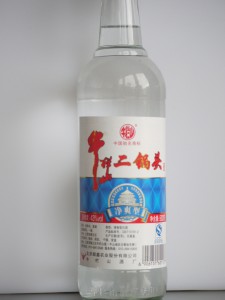 This one confused a lot of readers who thought it might be rice vinegar. The clue was in the alcohol content which is 42%. Although bai jiu translates literally as “white wine”, it is in fact a distilled spirit with a kick like a mule. I used it recently in the recipe for braised pork rib where I also describe the rituals associated with bai jiu. A relatively tasteless spirit like vodka could be used as a substitute. 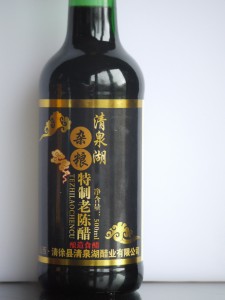 Chinese black vinegar is another essential seasoning for Chinese cooking and is also used as a dipping sauce for dumplings. Shanxi and Zhenjiang are famous for their vinegars. Here in Ireland I usually buy Chinkiang vinegar which comes from near Shanghai and is lighter in colour and flavour and I think that it’s name might be a variation on the pin yin spelling of Zhenjiang.

But I love the rich flavour and colour of aged vinegar like the one above. Watch out for vinegar with a total acid content above 6.0g/ 100 ml and aged for over 5 years.

Balsamic or sherry vinegar could be used as a substitute if you’re stuck. 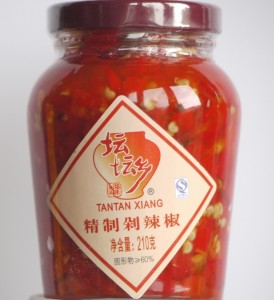 These chopped salted chillies have a hot, sour, salty taste. They are used in Hunan cuisine and crop up regularly in recipes in Fuchsia Dunlop’s Revolutionary Chinese Cookbook, the veritable bible of Hunan cuisine. I have used them recently in Hunan Steamed Fish, a recipe I learnt at Hutong Cuisine cookery school in Beijing recently.

The good news is that the brand I used in China, Tantan Xiang, is available for just a few euro in the Asia Market here. 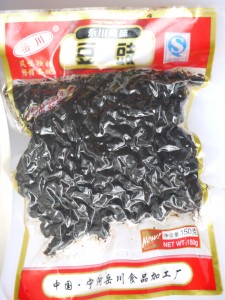 These fermented, salted, black soya beans are used as the base for black bean sauces but they also pop up in small quantities in Sichuan and Hunan dishes such as my own Sichuan Seafood Duncannon style and Hunan Steamed Fish. 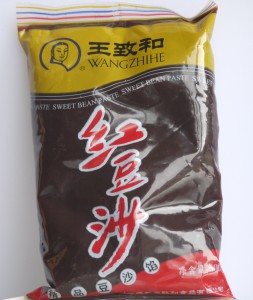 Yes well… I actually bought this thinking it was sweet flour paste – tian mian jiang – which is a sauce made from fermented wheat and often used as a dip for raw vegetables or with roasted duck. But in fact this is a sweet bean paste made with red beans which is used to fill Chinese pastries such as sweet sesame seed balls or moon cakes. 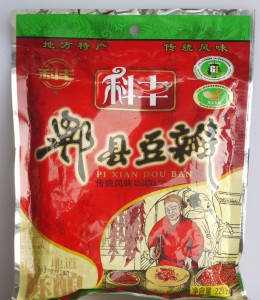 This fermented broad bean and chilli paste, also known as Sichuan chilli bean paste, is an essential ingredient in Sichuan cooking. It is used in recipes such as Twice Cooked Pork and Ma Po Dou Fu and crops up regularly in recipes in Fuchsia. Here in Ireland you can find versions such as Lee Kum Kee’s Toban Djan widely available but the best brand comes from a county in Sichuan Province called Pixian and now that I have discovered it I can’t do without it. Its intense, rich colour and flavour creates at taste sensation that is as addictive as the sichuan pepper that it often partners.

I haven’t  found a source of supply of Pixian chilli bean paste in Ireland yet so I’m relying on regular deliveries from Shane for the time being. 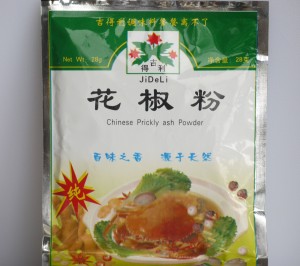 I picked this sachet up in a Chinese supermarket thinking I was buying peng hui – the ash of a kind of grass that grows in north-west China that is used as an ingredient to stiffen the dough used for hand-puled noodles. I was puzzled when I started getting replies to the quiz identifying it as Sichuan pepper but, sure enough, that’s what it is.

I usually buy whole peppercorns and dry roast them, then grind them when needed. It turns out that this powdered version has very good flavour and has come in handy when I need to make up the salt and pepper mix in a hurry, for instance for chilli salt and pepper seafood or cauliflower. So thank you for enlightening me kind readers. 🙂 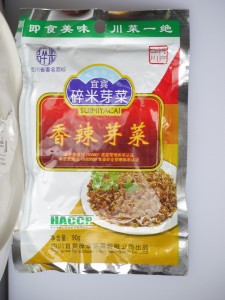 This is another “must have” ingredient – the special magic ingredient used in Sichuan dry fried green beans and many other Sichuan dishes such as dan dan noodles. it is a speciality of the southern Sichuanese city of Yibin and is a type of preserved mustard leaf. I picked up these handy little sachets in Beijing and I understand they are available in some Asian supermarkets here. If you can’t track them down, you can use Tianjin preserved vegetable instead which is available in earthenware jars in Asia Market. See Chinese Kitchen Essentials for more information.

By the way, the Chinese characters for ya cai are the same as those for bean sprouts so, as Sichuanese ya cai is not well known outside the province, I’m not surprised that some readers identified this ingredient incorrectly as bean sprouts. I also now understand why Shan’s MaMa sent me an ingredient I couldn’t place last Christmas which turned out to be preserved mustard tubers – zha cai – as the pin yin for these two is often confused. 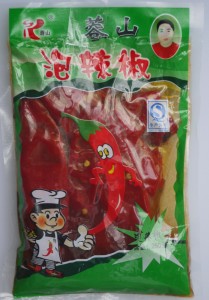 These whole pickled chillies are used in Sichuan Province to make a classic fish fragrant sauce where they are pounded to a puree with a cleaver. See Two Different Takes on Fish Fragrant Sauce to see how they are used. I love the sweet yet spicy undertones they give to fish fragrant dishes.

And the winner is…

Well actually there were two winners:

Although they used slightly different words to describe the ingredients, both got all the answers right – no mean feat since it turns out I didn’t know what some of them were myself!

I’m not at all surprised that two people passionate about Asian cuisine came up with the right answers.

You are probably already familiar with Joanne’s excellent blog which tells of her food adventures in Dublin and Ireland and beyond (and if not you should be – it’s my essential guide to eating out in Dublin) but you may not have come across John before as he lives in Canada’s Northern Territory of Nunavut and works as a lawyer. His blog is packed full of glimpses into life close to the arctic circle, “notable noshings”, restaurant reviews and descriptions of foodstuffs and ingredients. I’m intrigued by the foods he is able to track down in that remote area with less than a dozen restaurants within 2,000 km of his home.

As you know the prize was a copy of  Serve  the People – A stir-fried journey through China. The book is written by Jen Lin-Liu, a Chinese American journalist and food writer who decided to enrol in cooking school in Beijing and went on to found Black Sesame Kitchen, one of the two cookery schools I attended while I was there.

I thought I was going to have to toss a coin between John and Joanne, but when I informed John that he had tied for first place, he let me know that he already owns the book in question so, with his agreement, I’ve  awarded the prize to Joanne.

A number of other followers of the blog came very close with 9 out of 10 correct answers. They were Marie McKenna, Elaine Cassells and Deirdre McCann. Well done ladies.

I hope you all enjoyed the fun. Back to cooking now for me and another competition coming up soon.